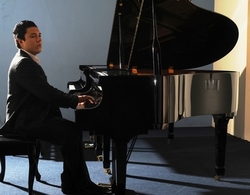 Born in Guayaquil – Ecuador in 1983.
Formally started his musical studies at nine.
By 12 he gained a scholarship to study at the most prestigious conservatory of Ecuador
- Conservatorio Superior de Musica “ Rimsky Korsakov”- and got a place in the class
of Reinaldo Cañizares –who was educated under the Russian system.

Alejandro has won 5 national first prices at piano competitions,
most of them as overall winner from all categories. In addition, he has obtained
two international prizes at international competitions:
Alejandro has been soloist of all four national professional orchestras in his country:
Guayaquil, Quito, Cuenca and Loja.
He has played in concert halls in Ecuador, Cuba, Spain, Italy, China, Belgium and Holland.

He has performed in more than 10 occasions as soloist with the following repertoire:
Collaborations

Besides his Bachelor in music (2004), he did a minor in Psychology Applied to Human Resources
and has a piano teacher diploma (2005). Before being in the master program of the Conservatorium
van Amsterdam, Alejandro was a piano teacher at the prominent University “Espiritu Santo”,
the Catholic University of Guayaquil and at the Rimsky Korsakov conservatory in Guayaquil.
It is pertinent to remark that his students have also obtained national piano competition prizes.

Chosen by the internationally renowned piano pedagogue Jan Wijn to be his student,
he finished the master piano program of the Conservatorium vam Amsterdam in July
2011 (Jan Wijn has been teacher of pianists as Ronald Brautigam, Nino Gvetadze,
Hannes Minnar, Wibi Soerjadi and Ivo Janssen among others).

In September of 2011 he participated in the television competition "Onder Wibi's Vleugels".
After several masterclasses and an elimination process, he got until the finals and became third.
In October of 2011 Alejandro made his debut as orchestra soloist in the Beurs van Berlage in Amsterdam
playing the Leroy Anderson piano concerto.

In 2012 Alejandro has been very active in the Netherlands given solo concerts, playing chamber music,
playing with choirs and also playing as part of symphonic orchestras. In June of 2012 Alejandro played the
2nd concerto of C. Saint-Saens. The conductor was maestro Pablo Sabat, main conductor of the orchestra
"Ciudad de los reyes" of Lima-Perú.

In August 2014 Alejandro gave a chamber music recital together with Master violinist
Elisa Kawaguti in Guayaquil-Ecuador.

In August 2015 Alejandro played together with his brother Isaac (first violin of the Hunan's symphonic orchestra) at the theater of the national library of China in Beijing. The concert was organized by the embassy of Ecuador in China to celebrate  35 years of diplomatic relationships.

Alejandro finished his second masters program in the Conservatorium of Utrecht in Piano Education with Alan Weiss
(prize winner of the Queen Elizabeth piano competition in Brussels). Henk Ekkel was his teacher of piano pedagogy.
Alejandro is very active as a teacher and has more than 40 students of his own with ages between 5 and 50 years and organizes two concerts a year for his students.
Powered by